The Gallery is pleased to present you, for the first time in Paris, a Dona Nelson’s exhibition.

Brooks Adams, contributing editor of Art in America, tell us about the artist’s career and his work.

” Dona Nelson has over the last five decades surely proven to be one of the most relentlessly searching, rigorously idiosyncratic, and technically inventive painters alive. Her recent, hypermaterialist field paintings, often translucent, two-sided and suspended in free space, have become landmarks, most notably in the 2014 Whitney Biennial, for younger painters seeking to extend the experimental possibilities of the New York School. Her painterly “combines” bristle with lengths of knotted and painted string pulled through the canvas. They synthesize outmoded notions of “women’s work” (quilting, embroidery) with the big ambitions of a Jackson Pollock. Nelson makes free use of dripping and staining techniques, as well as psychic automatism. She seems ready to try anything to keep the handmade art of abstract painting alive.

The ‘80s American Scene paintings are upon closer inspection multivalent, full of visual synecdoches. Internal elements don’t quite cohere. In Cold Busy Street (1984), a silhouette in overcoat is broadly empathic, as are the huge purple hands warming themselves over a bright yellow fire in a barrel. A red, prismatically rendered coat tapers into purple trousers with no feet. Above dangles a trio of disembodied shoes: two purple hightops and one orange mocassin. These quirky truncations suggest a gritty urban realism as well as a collage worldview of urban snippets. 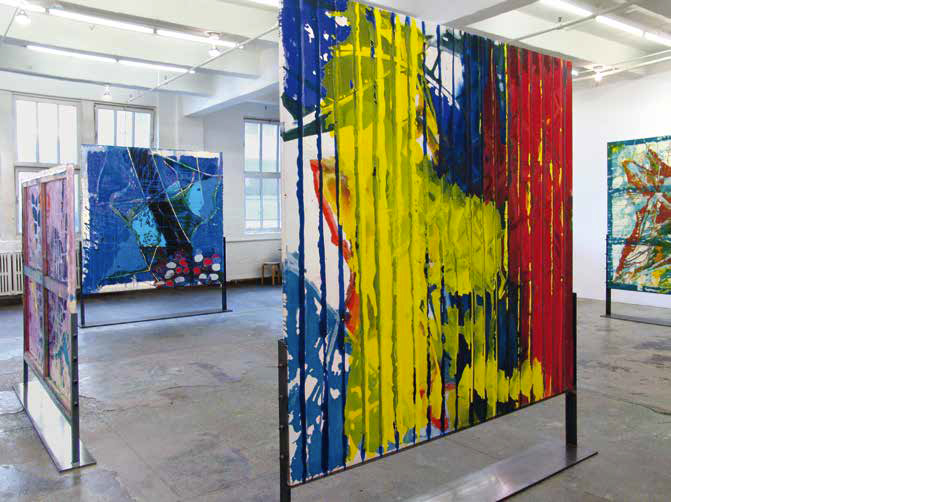 Hyper-materiality gained steam in the ‘90s paintings. The building up of surfaces with cheesecloth and gel medium seemed quixotic at the time, especially when the works were abstract. What was Nelson after? Decorative Octopus (1991) offers a rare moment of clarity. The cloisonnist zones of bright red, yellow, purple and green look scored, but they are in fact achieved by laying myriad strips of dyed canvas on top of a supporting canvas. Nelson did a whole series of octopus paintings in these years, and some of them are nearly abstract. In this example the obsessive nature of the technique, and the resultant imagery of saturated color and mazelike pattern, put us in mind of Outsider Art or Art Brut.

Today we can see that Nelson’s work has definite affinities with second-generation Abstract Expressionism, recently discussed in a magisterial tome by Mary Gabriel, Ninth Street Women: Lee Krasner, Elaine DeKooning, Grace Hartigan, Joan Mitchell, and Helen Frankenthaler: Five Painters and the Movement That Changed Modern Art (2018). That would be Hartigan who suddenly went figurative after an abstract start; Krasner who cut up her failed paintings and later recycled them; Frankenthaler, a pioneer in staining techniques; and Mitchell with her joyous paeans to nature. Nelson has internalized all these artists’ struggles and triumphs.

Her two-sided paintings also have international ties. Pierre Soulages has been experimenting with the idea since 1966, when he first hung paintings in free space on metal cables. Later he would suspend his “Outrenoir” series in identical formats back-to-back. Ca. 1974 the Iranian artist Behjat Sadr (1924-2009) – she worked in Paris after the ’79 Revolution – painted a free-standing, two-sided abstract work on an aluminum panel (recently exhibited at Balice Hertling in Paris). Yet Nelson’s twosided works are refreshingly novel in the way the duel facets are strongly interconnected, both conceptually and artistically.

Of course, the two-sided painting is not a new idea: Renaissance panels frequently have a front and back painted side. Renaissance polyptychs are multi-paneled works with wings that can be opened and shut and that frequently jut out into space, just as Nelson’s work did in the 2014 Whitney Biennial.

I for one breathed a sigh of relief when in 2016 monumental and colossal figures reappeared. Autumn Andrew (2016) features under-lifesize and colossal figures – some of them portraits painted from a model – pulled into the empirical here and now. The viewer is involved in new, active ways. Walking around the two-sided work, squeezing in between the pair of freestanding totems on a sturdy wood base, we measure our own body movements against those of the depicted figures. Here I felt the return of Nelson’s maverick ‘80s spirit.”